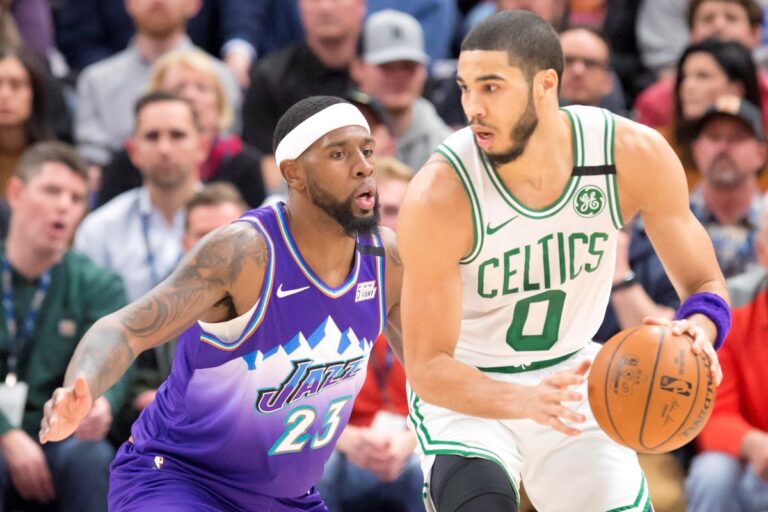 Jayson Tatum has definitely been on a tear this season as he dropped another 30-point game. This time he led the Boston Celtics in tearing the Utah Jazz apart routine to a crucial 114-103 win yesterday.

Tatum made 13 of his 20 shots in the game for 33 points while snatching 11 rebounds in the win. The Celtics were playing without Kemba Walker since the star guard has not suited up since February 13th after going down with a knee injury.

The Celtics dominated the paint with 56 points while making 21 assists on the run. It was one of the biggest games for the team this season considering the rivalry that was born out of Gordon Hayward’s decision to leave Utah for Boston.

‘It’s a tough environment playing in Utah’, said Jaylen Brown, who tallied 20 points and six rebounds while shooting 50% from the field. ‘Gordon will probably tell you that, but I know we’re all looking forward to it and looking forward to getting a win for him’.

The Celtics led by as many as 15 points in the game. They survived a furious rally late in the second quarter from Utah, but the team held their ground and was able to capitalise on the fastbreak.

‘That’s a big win on a back to back in a tough environment against a team that was desperate for a win’, Brown said. ‘It doesn’t get too much better than that. So we just have to keep building on it, man. Just keep getting better. Just keep preparing to win every game. And just building good habits getting ready for the playoffs’.

Brown explained that Hayward was definitely over with the issue. He played at Utah for seven seasons before deciding to bring his talents to the Celtics in 2017.

It might be over for Hayward, but the Jazz fans definitely took pleasure in chanting ‘boos’ whenever the star forward held the ball in his hands in the game. Utah’s Donovan Mitchell answered with his own burst of 37 points, five assists and five rebounds in the losing effort.

‘I was happy we got this win for G’, Tatum said. ‘I was glad we got that for him. That’s what you want. Come in, a place like this, this is one of the toughest environments in the league, and for him to come back and help him get a win’.

For more updates on the NBA, visit Sportsbet.io News