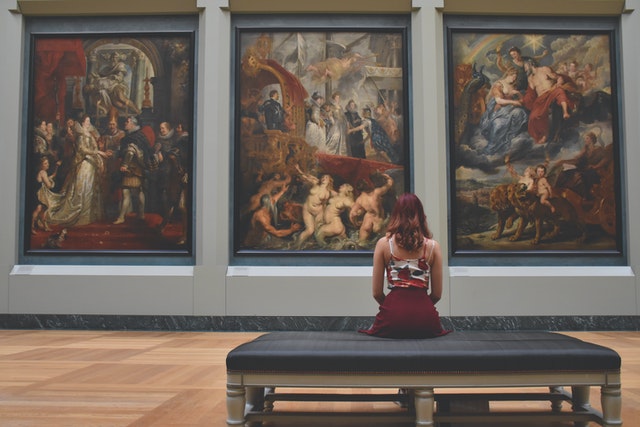 Paul Gauguin (1873 – 1903) was a Post-Impressionist painter and sculptor from Paris, France. He is best known for his bold colors and experimental style. In addition, Gauguin is considered one of the most important figures of the Symbolist art movement.

Paul Gauguin led an exciting life, to say the least. He had lived in several countries, got married, had children, and had a stockbroking career all before he ever began painting. However, this dream to become an artist consumed the second half of his life.

Art was undergoing a drastic transformation during this time, and Gauguin became particularly interested in the stylings of imported Asian and African art. The vigor and symbolism found in both styles, alongside elements from Primitivism, Synthetism, and later living on the French Polynesian islands, contributed to Gauguin’s art having such a unique and cultural flavor.

By the late 19th century, European culture had become fascinated by the art of Africa, Asia, Micronesia, and the Native Americans. These wild and simple cultures would quickly become a domineering influence on many of the greatest artists of the time and the Post-Impressionist movement as a whole.

Gauguin, in particular, became fascinated with these bold and colorful designs. By 1887 Gauguin had grown tired of France and moved to the Caribbean Island of Martinique. It was here that Gauguin’s career as a painter would begin to blossom.

Gauguin enjoyed watching the tribal inhabitants go about their daily lives and began using them to inspire his paintings. Among the Mangos is one such painting. It depicts several tribal women working in a mango garden. The bold colors, impressionist style, and depiction of tribal life would become a staple throughout Gauguin art.

By 1891, Gauguin had moved to the French colony of Tahiti in the Polynesian Islands of the Pacific Ocean. During this time, Gauguin fell in love with the simplicity of tribal culture, and as a result, many of his finest paintings were produced during this period.

Of all his tribal-themed paintings, the Spirit of the Dead Watching is considered by many to be his finest and most famous drawing. The colorful impressionist rendering depicts Gauguin’s tribal wife laying naked on a bed and is reminiscent of similar impressionist paintings such as those of Manet or Klimt.

The painting itself retells the story of Gauguin’s wife mistaking him for a demon known as the “Tupapaus” when he returned to their home late one night. The incident inspired Gauguin to paint the mystery of the well-known tribal monster onto canvas, and it is now one of Gauguin’s most recognizable works.

The Seed of the Areoi is another excellent example of tribal influence involved in Gauguin’s work and his sincere love for its culture and people. The painting is a portrait of a young naked Polynesian woman sitting under a colorfully abstract tropical backdrop.

In the original Polynesian myth of the Areoi, the Sun God mates with the most beautiful woman in all the land, and a new race is born. Gauguin’s painting directly represents this woman and can also be seen as relating to the virgin Mary motif popular throughout history.

The painting explores the origins of civilization and the meaning of human existence itself, a question that has been asked for centuries. For French painter Paul Gauguin, this question and the ways of tribal life would be a significant driving force in his life.

When Gauguin first settled on the Polynesian islands, he was overcome with a new sense of excitement and freedom. Gone were the refined ways of modern French society, only to be replaced with a tropical beach paradise such as Tahiti.

In the Day of the God, Gauguin artist portrays the sights of the tropics with an elegant blend of Impressionism, Symbolism, and Primitivism. The composition’s warm imaginative colors and relaxed nature can leave quite an impression of “Paradise” on the viewer.

The Day of God is the ideal dream of humanity. In this world, the water is alive with color, and the people live in harmony with nature. They honor God and each other. They live free and work together for one another. In this painting, it is easy to see why Gauguin loved these Islands and stayed there until his death.

Where Do We Come From? What are We? Where are We Going? Is regarded as Gauguin’s most respected masterpiece and is seen as one of the most famous Post-Impressionist paintings. It embodies all the artist’s personal and can be seen as a pinnacle of his life work.

From the title alone, the deep emotional weight of this painting can be felt. Gauguin painted this masterpiece at a time that was the darkest of his life. The French painter’s daughter had just died, and Gauguin planned on taking his own life out of grief after the painting was completed.

The painting is the largest Gauguin ever created. Its color and complexity beautifully combine to create an emotional retelling of the story that is life. The figures in the painting attempt to answer the questions posed in the title, and an influence of Eastern religious views can be seen.

It is easy to see from French painter Paul Gauguin’s paintings how he fell in love with the tribal way of life. He lived many happy years there and painted some of the most beautiful Post-Impressionist island paintings of all time. To learn about Gauguin, the artist, check out his collection of work online.